29 Dec 2015: Gwen Pew and Andrea Cheong round up the best exhibitions, festivals, fairs and tours to check out during the nine-day extravaganza

Art Stage – the main event around which the rest of Art Week revolves – returns for the sixth year and is once again set to take place across four days. It features 143 galleries from 32 countries, many of which are from Asia. New elements visitors can look forward to this year include the Southeast Asia Forum, and artworks exhibited in the public areas of the fair.

Representing both renowned and emerging contemporary artists, the first edition of this art show is themed ‘A World of Art’. Fringe activities include artist encounters, which give visitors the chance to speak to 16 artists from around the world, as well as tours, live painting sessions and activities for the whole family.

Running for the third year, this award aims to celebrate emerging artists in the Asia region. After reviewing over 100 nominations from curators, critics and art experts across Asia, the panel of judges has shortlisted three artists for each of the five categories. Their works are all on show at the ArtScience Museum, and the winners are announced on Jan 19.

This show features works by three local artists: Jack Tan presents an outdoor light installation, Sean Lee invites strangers to hop into bed to have their portraits taken together, and Joo Choon Lin stages a performance piece around an interactive sculpture.

Forum at NGS: Capturing the Moment

While many artworks are physical objects that you can hold and easily display, there are also those that are far more ephemeral or abstract in nature. Like performance pieces or works that degrade over time. This forum looks at the issues that institutions and collectors face when researching, documenting, archiving and conserving such pieces of art.

The talk is inspired by and runs alongside Tang Da Wu’s seminal 1980 exhibition, Earth Work, as well as a group show titled A Fact has No Appearance, the latter of which examines the impact of fresh ideas that arose in the South-East Asian art world during the turbulent ’70s.

The practice of traditional calligraphy is alive and well today, and this inaugural bilingual calligraphy forum presents a series of lectures, discussions and demonstrations in appreciation of the craft.

The second of five instalments of the series hopes to spark a conversation on ‘Art and the Big Ideas of a Small Nation’. This discussion is held as part of SAM’s current exhibition, 5 Stars: Art Reflects on Peace, Justice, Equality, Democracy and Progress.

Inspired by JG Ballard’s novel of the same name and Tan Pin Pin’s 2003 film 80km/h, Concrete Island is a project by NUS Museum that was created as a response to those works.

It comprises an exhibition, a reading workshop, a mobile cinema programme, and a bus tour along the Pan Island Expressway, guided by architect Lai Chee Kian. Taken together, the event is an examination of Singapore’s urban history, movements, and the design of expressways.

Learn more about the three new public art installations that were launched along the Jubilee Walk at the end of November: ’24 Hours in Singapore’ by Baet Yeok Kuan, ‘Cloud Nine: Raining’ by Tan Wee Lit and ‘The Rising Moon’ by Han Sai Por and Kum Chee Kiong.

Back for the third edition, Art in Motion once again features 16 galleries that are part of the Art Galleries Association Singapore – including Chan Hampe Galleries, Gajah Gallery and STPI – where a series of exhibitions, book launches, panel discussions and other events are set to take place.

What do skateboards, graffiti and DJs have in common? They’ll all be featured in the Aliwal Urban Art Festival this year, that’s what. For the first time, the event also has an exhibition segment entitled Cannot be Bo(a)rdered, where 16 artists from South-East Asia come together to explore youth culture through skateboard art. Other performers include The A Capella Society, DJ RZPZ and Take Two.

Once the sun sets, hit up Gillman Barracks’ bi-monthly arts bash, which brings together visual art, music, performances, guided tours, talks, as well as lotsa food and booze. Eleven galleries are taking part in this edition.

Eat, shop and drink to your heart’s content at The Local People x Singapore Art Museum Art Week Market. Expect over 100 locally based vendor booths, while homegrown musicians the likes of Jaime Wong, Amanda Tee, Jean Goh Seizure and Stanley Ho serenade you in the background. Top it off with drinks at The Local Soda Bar for a boozy end to your Sunday.

A surge of art fairs, each catering to different budgets and tastes, is crashing onto our shores. Gwen Pew highlights five upcoming editions worth checking out. 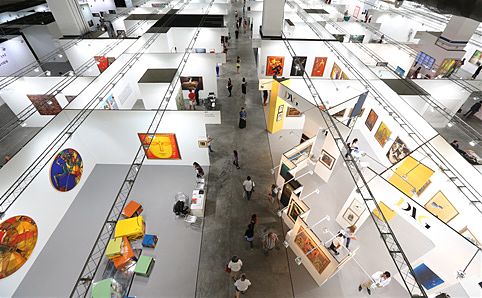 First founded by Fabio Castelli in Milan in 2011, this is the first time the fair is held outside of the Italian city, and Castelli is hoping to make it an annual edition here.

Type of art Contemporary art in the form of photography, video and design by both established and emerging artists from Asia as well as Western countries. There will also be a design furniture section in the Singapore edition.

‘AAF Singapore brings a new generation of collectors into the market by breaking down the barriers for new buyers,’ says fair director Camilla Hewitson.

First founded by Will Ramsay in London in 1999, the Affordable Art Fair has since expanded to 12 other cities, including New York, Hong Kong and Singapore, where it has been held annually since 2010. This year marks the first time the fair is being held twice in a year in the city, and organisers are hoping to keep it a bi-annual affair.

Price range $100-$10,000 Highlights Artcommune Gallery (Singapore), representing Hong Sek Chern, known for her unconventional depiction of landscapes and urban-scapes; TAG Fine Arts (UK), representing David Spiller, who combines the punchy aesthetics of pop art with his own brand of expressionism; and Eyestorm (UK) representing Jacky Tsai, famous for the floral skulls he created for the late Alexander McQueen in 2008.

‘Some fairs depend on the reputation of attending galleries. But we prefer young gallerists and artists,’ says founder Tomy Kim.

First founded by Tomy Kim in South Korea in 2009, which had originally operated under different names. The first Bank Art Fair, however, was held at Island Shangri- La Hotel in Hong Kong last year. The Singapore edition will also be debuting this year, and will be returning annually.

Type of art Mostly paintings – especially in oil – but also sculptures. The majority of the works are contemporary, and participating galleries and artistshail from all over the world including South Korea, North and South America, Myanmar, Hong Kong and more.

First founded by Laure d’Hauteville, who is also behind the Beirut Art Fair, Singapore Art Fair will hold its inaugural edition this year. It will be held here yearly.

Type of art Works by both emerging and established artists from the ME.NA.SA. regions.

First founded by Lorenzo Rudolf in 2011 as the first international art fair in Singapore. It occurs annually.

Type of art Modern and contemporary art from Asia and the world, with a selection of regions having their own curated platforms. Three-quarters of the works in the 2014 edition were from the Asia Pacific region.