28 Dec 2015: Artist Donna Ong’s latest exhibition, ‘My Forest has no Name’, invites visitors to look at tropical rainforests from a different light 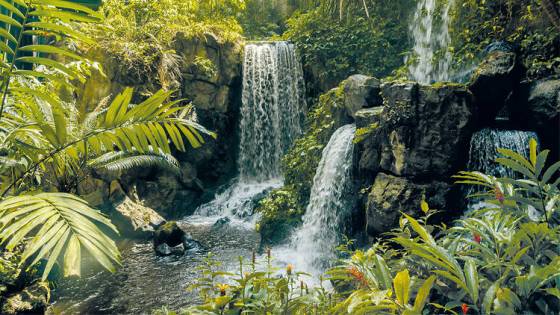 Stepping through the door, we immediately find ourselves surrounded by lush layers of leaves. A few parrots peer at us curiously, while a tiger and a leopard snuggle together on the far end. In the middle of it all, Donna Ong sits at her desk, carefully adding another layer onto the diorama that she’s working on. No, this is no forest – it’s the local artist’s studio, the (faux) flora and fauna all part of her upcoming exhibition, My Forest has No Name.

In it, Ong uses tropical rainforests to illustrate the gap between reality and representation: specifically, how Westerners of the 18th and 19th century painted the tropics with such fancy and exoticism. The forests depicted in paintings and sketches from that era – which were often created by artists who had never stepped foot in these places – were as accurate as North Korean propaganda. Think ferocious beasts among banana and palm trees, with half-naked natives lending credence to the half-baked notion of the ‘white man’s burden’.

The artist hopes that visitors to her show will be immersed in a romantic, imaginary world that she wishes really had existed. As a child, Ong would pore over the pages of The Jungle Book and The Faraway Tree, and dream up fantasies of forests and mountains. It’s a wanderlust that she wants to elicit – and she wants visitors to also question their own impressions, true or not, of the natural world.

The little diorama that she’s working on, which comprises cut-outs of various plants and animals from natural history books that are sandwiched between sheets of acrylic, forms the central part of the show. Several of them are placed within modified wooden lightboxes, which are dotted around a room filled with the leaves and animal figurines that greeted us.

‘Oh, I bought these from antique shops. Some of them are from Carousell,’ Ong giggles as she gestures towards her exotic porcelain menagerie. ‘When I went to collect these from people’s houses, sometimes the owners would ask me what I’m planning to do with them. I’d try to explain that I want to use them for an exhibition, but sometimes they don’t really get it.’

Besides the figurines, the other works on display include photographs of artificial rainforest landscapes that Ong found within hotels and botanic gardens around the world. There’s also a treasure chest filled with items like guns, bones and condoms – things that have been linked to the jungles in various newspaper articles that she collected – to expose the dark side of the woods, lest we miss the forest for the trees.