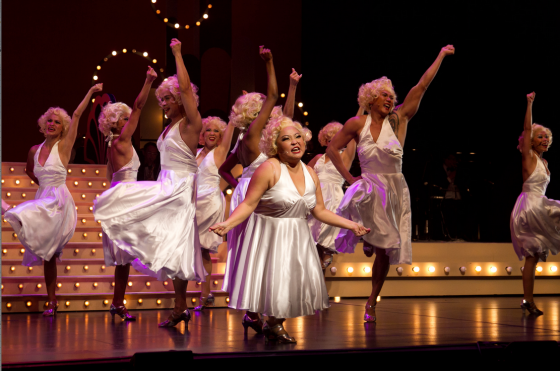 Back for the fifth year, Crazy Christmas is this tropical island’s way of announcing that the festive season is here once again, with the theme this time being ‘Silver Screen Meets Silver Bells’. As someone who has only been in Singapore for a few months and never witnessed the magic of the show before, however, I must admit that I was initially quite worried about the level of cheesiness that I might encounter onstage. A bunch of people paying ‘tribute’ to the greatest people, hits, and flicks of the Golden ‘30s and ‘40s? What could possible go wrong?

The answer to that, as it turns out, is that very little did go wrong. From George Chan’s fantastic umbrella-twirling rendition of ‘Singing in the Rain’ to Adrian Pang, Karen Tan, Judee Tan and Selena Tan’s hilarious Singaporean parody of ‘The Wizard of Oz’, the local-star-studded show is as delightful as any seasonal romp could be.

Other side-splitting sketches include funnyman Hossan Leong’s Charlie Chaplin impersonation, Selena Tan singing ‘Happy Birthday’ in the notorious, whispery style of Marilyn Monroe, and – for something with a bit more of an Asian feel – Judee Tan’s insistence as ‘Dr. Teo Chew Muay’ that we should not help the ang mo celebrate Christmas because frankly, there are enough ang mos celebrating it already.

While I enjoyed the individual acts much more to the times when all of them stand in a line and try to poke fun at each other, one of my favourite scenes does involve all of them coming together at the end to recreate some of the most well-known movies from the time, including Little Mermaid, Titanic, and Jaws. The actors are all perfectly in sync with each other and it’s clear that they are having the time of their lives, which is an infectious feeling that spreads to the audience too.

The skits are separated – and sometimes accompanied – by a band of pretty dancing ladies, cheekily named the ‘Merry Miss A Toes’, some of whom you may recognise from the recent Dream Academy production of Company. Apart from lots of laughs and booty-shaking, there are, of course, also plenty of carolling. The duet by Michaela Therese and Robin Goh singing Frank Loesser’s ‘What Are You Doing New Year’s Eve?’ and a medley by acapella group Vocaluptuous are great, but the biggest surprise was Karen Tan’s 16-year-old daughter, Rachel Quek, who promptly stole the show by singing ‘I Saw Mama Kissing Santa Claus’ in the most angelic voice.

Fun and light-hearted, Crazy Christmas is the ultimate way to get your holiday spirit pumped up. Tickets are going fast, however, so if you haven’t gotten yours yet then you’d better hurry!

Note that this review is based on the ‘nice’ version, played by Hossan Leong, which was showing until 2December. The ‘naughty’ version, which will be showing from 4 to 9 December, will be played by drag queen comedian extraordinaire Kumar and suitable only for people aged 18 and above.