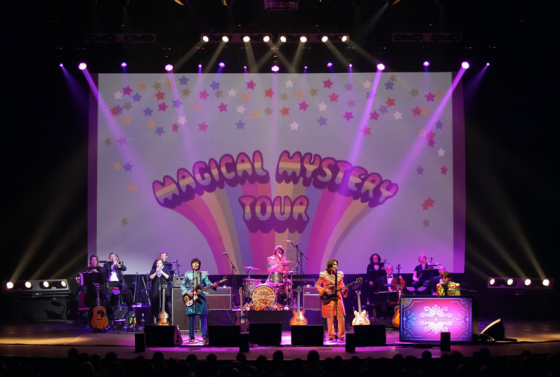 The Bootleg Beatles. Photo from http://www.bootlegbeatles.com.

There are some bands that one should never try to cover because it is virtually impossible to do them justice, and any attempt to do so would usually end in embarrassment for everyone involved. The Fab Four ranks pretty high on that list, but The Bootleg Beatles not only has the audacity to cover their songs – they even imitate their looks, their fashion, and their mannerisms. And the most insane part of the whole shebang is that they have been pulling it all off impeccably since 1980.

The concert is divided into four parts, each representing a different period of the Beatles’ spectacular ten-year career between 1960 and 70. The change in era is accompanied by a change of costumes – with the most spectacular one being the legendary neon satin military outfits from ‘Sgt Pepper’s Band’ – and together with the help of wigs and occasional fake moustaches, the four guys onstage look uncannily convincing.

Being someone born a few decades too late to have had the pleasure to experience The Beatles first hand, this concert gave me the opportunity to witness something that I imagine is pretty darn close to the real deal. Steve White, Adam Hastings, Andre Barreau and Hugo Degenhardt could not have made a more similar Paul McCartney, John Lennon, George Harrison and Ringo Starr respectively if I’d dreamt the whole thing up. The four of them share a natural rapport and they all possess the same cheeky charm as The Beatles, with the addition of occasional anachronistic quips.

‘Take as many photographs as you like,’ one of them said. ‘Just don’t use digital cameras because, you know, they haven’t been invented yet.’

‘We’ll be taking a short break,’ another announced before the interval. ‘For about six years.’

As if the lookalike aspect isn’t impressive enough, they are also the epitome of pitch perfect and sound exactly like The Beatles of my CDs. They manage to capture every minute emotion in every single note, and fully deserve the standing ovation they received. The band is backed by a fantastic team of back up musicians, but Annette Brown warrants a special mention for both her enthusiastic tambourine shaking as well as her astounding piccolo trumpet solo for ‘Penny Lane’.

Another element I loved is the visual projections that provide a backdrop throughout the show. I am normally extremely put off by them because they come across as tacky more often than not, but in this case it’s simple, quirky, effective, and really helped to enhance the performance.

The band played all the classics from ‘Love Me Do’ to ‘Help!’; from ‘Lucy in the Sky with Diamonds’ to ‘Back in the USSR’ in the two-and-a-half hour show. Even though the Grand Theatre at Marina Bay Sands is supposed to be one of the ‘posher’ venues in town, the band succeeded in getting everyone up and dancing.

The concert was phenomenal in every sense, and the band members are legends in their own right.

One thought on “The Muse: ‘The Bootleg Beatles’ Review”