As KidsFest returns to Singapore for its second edition, Gwen Pew sums up the five shows that will be hitting the stage this year. 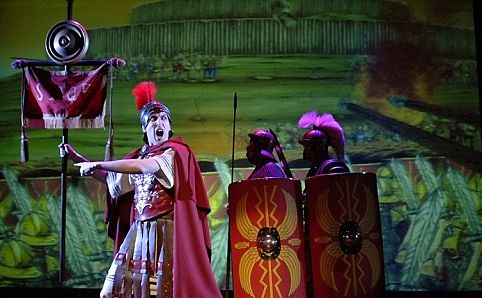 10 Dec 2012: Little ones are in for a treat this at KidsFest. Hosted by Hong Kong-based international theatre company ABA Productions, the festival – which takes place in both Singapore and Hong Kong each year – is created specifically for children and their parents to enjoy. All the plays at KidsFest are imported directly from the UK, and they are either still showing at the West End or have been performed there at some point in the past.

‘Every show is handpicked by me and my team,’ says Matthew Gregory, executive producer of ABA. ‘We travel to London or places like the Edinburgh Fringe [Festival] to see them. Sometimes we send parents or teachers to check them out, and sometimes I’ll bring my two kids with me – one of them is three and the other’s five – who are really helpful as I can gauge how good a show is judging by their reaction!’

Featuring a mixture of shows – ranging from award-winning productions to smaller, lesser-known shows – KidsFest is aimed at children from the ages of three to about 15, and Gregory hopes that it will encourage the younger generation to improve their English in a fun and engaging way, as well as experience live theatre.

‘I know a lot of other companies like to localise plays when they take it to other countries, but we don’t do that; we keep them exactly the same as the UK productions,’ he says. ‘All the costumes and props are brought over, except the sets which are re-created in a place to the north of Hong Kong – it’s the same place where the sets for Jackie Chan’s movies are made, actually – because it’s more cost-effective, but they still look exactly like the sets in the UK, so the audience here will get the same experience.’

Here’s a round down of what’s on offer this year.

Based on Julia Donaldson and Axel Scheffler’s eponymous book – which has been hailed by UK newspaper Observer as ‘a modern classic’ – the acclaimed West End production of The Gruffalo has been touring the UK for eight years to date. If you didn’t catch it at the last KidsFest!, here are a few more chances to watch this adaptation of Julia Donaldson and Axel Scheffler’s award-winning story about a mouse who makes up a monster to scare others – and meets it himself!

22-27 Jan
Adapted from the original book and TV series of the same name, which first came out in England back in the 1970s, the character of Mr Benn will traditionally have a different adventure in each book/episode as he dons a different outfit in a magical fancy dress shop, then transforms into that particular character. This stage production, which has only been around for a year and a half, features only two of his adventures – one as a cook and one as a driver – but also includes a medley at the end that follows him to various faraway lands, where he takes on the roles of a knight, a wizard, a spaceman and more. The stories of Mr Benn are about the power of imagination, with the moral being that you can become anything you want to be if you put your mind to it.

Room on the Broom

30 Jan-10 Feb
Narrated by some happy campers, the tale of a friendly witch whose broomstick breaks when she picks up too many animals – including a dog, a frog and a bird, as well as the witch’s own cat – after they help her find her lost hat, wand and bow, is originally written by the same power duo that created The Gruffalo. Featuring a Welsh dragon, a snazzy broom that lights up and a repertoire of catchy tunes, there is a lot going on in this show both visually and plot-wise, which means that older siblings will enjoy it too. The animals, who are manipulated by skilled puppeteers, will be greeting everyone in the auditorium before the show starts – so don’t be shy and be sure to go say hello!

31 Jan-9 Feb
Ever wondered what would happen if a Viking moves in next door to you, or what the infamous King Henry VIII might have been like in person? This show will answer all the questions you may have had about the long – and sometimes not so glorious – history of Great Britain, condensing the country’s 2000-plus-year history into funny, easily-digestible but still factually accurate chunks. Accompanied by an original score (we’ve heard that there’s a bit with Guy Fawkes, the man behind the infamous Gunpowder Plot in the 1660s, who has a particularly entertaining number), there are also plenty of opportunities for everyone to participate. Don’t worry if that’s not your thing – the producers promised that it won’t involve embarrassing anyone on stage.

3-10 Feb
Get a crash course in Roman history and find out what life was like for people living in the notorious empire in this production, where two actors take on a whole range of characters from Spartacus to Emperors and cover topics as varied as slavery and school life way back when. As it only covers 300 years’ worth of history – compared with the two millennia of Barmy Britain – this production is able to cover more ground and get into the intricate details; your kids will be sure to pick up a whole bunch of nasty facts to show off to their friends afterwards. This one’s guaranteed to be a popular draw – in addition to receiving a five-star review from the BBC, Ruthless Romans has also been adapted into a video game – so book early.