It’s a nice leafy refuge to get away from the bustle of Chinatown. 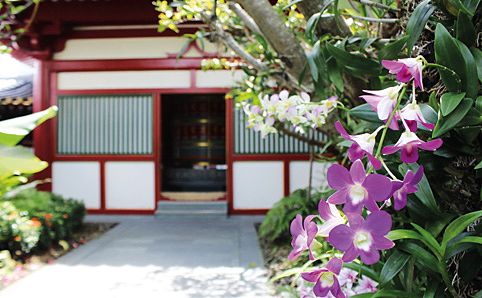 History: If you look closely at the Buddha Tooth Relic Temple and Museum located on the corner of South Bridge Road and Sago Lane in Chinatown, you’d be right in suspecting that it’s not as ancient-looking as you might expect temples to be. That’s because it actually only opened on Vesak Day 2007, after months and pages of design submissions (which were either too contemporary, too Southern-Chinese, too dull coloured, and so on) and two years of construction work. The final chosen building design encompasses the architectural style of the Tang dynasty, with green, red and gold paint to make it stand out against the urban environment. The Buddha Tooth in question was allegedly discovered in 1980 by an abbot in Myanmar within a collapsed gold stupa, and presented to Venerable Shi Fa Zhao, founder of the Buddha Tooth Relic Temple, in 1992.

What to see: A series of religious artefacts – including paintings, sculptures as well as other relics – are displayed across six floors (including the basement and mezzanine level), which are all accessible by an elevator. For some extra peace and quiet, however, we would recommend giving its rooftop garden a visit. Granted, it’s a little cramped, but it’s a nice leafy little refuge to get away from the bustle of Chinatown below. You can reach the semi-secluded area via a marked staircase from the fourth floor, which is equipped with a wheelchair lift. At the top, you’ll find the central Ten Thousand Buddhas Pagoda – which houses a huge prayer wheel – surrounded by a series of beautiful orchid flowerbeds that are all named after various eminent Sengha, the Buddha’s followers. There are also sheltered benches located alongside the walls of the garden if you need a few moments of rest and serenity, although do be forewarned that traditional Buddhist music plays somewhat hauntingly in the background.