After a ten-year hiatus, local photographer Mary-Ann Teo makes a comeback this month with a show of images shot by a pinhole camera made with a rubbish bin. Gwen Pew takes a closer look. 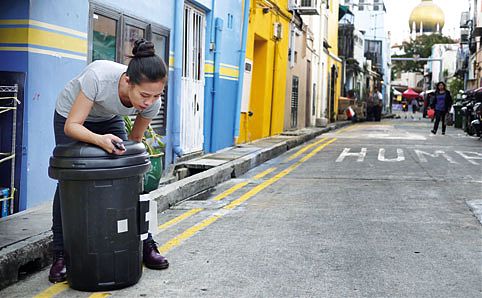 Mary-Ann Teo at work on her latest series, ‘Through A Pinhole’. Image courtesy of the artist.

3 Sep 2013: I developed an interest in photography in primary school because I felt I saw things differently from others,’ reminisces local photographer Mary-Ann Teo. ‘I would photograph drains with an Instamatic camera because they looked like pretty streams with their rust-stained concrete.’

Although the 39-year-old is now a full-time photography and art theory lecturer at various schools – such as Lasalle and Nanyang Technological University (NTU) – and has not held an exhibition since 2003, Teo never lost her gift of seeing the world in quirky ways. This month, she makes a comeback with cool images shot with a rather unusual contraption: a pinhole camera made from a recycled rubbish bin.

‘I’ve constructed pinhole cameras with the usual containers such as Milo and tea tins and boxes before,’ she says, while also admitting that this is the first time she has used something a bit more unconventional to snap pictures with. ‘The bin is suitable since it is round, which would give me a slight wide-angle effect in the images,’ she explains. ‘It has a proper lightproof cover and it was already black, so the only thing I had to do with it was to pierce a hole through one side of the bin and make a cover for it. It’s good for placing around the areas I wanted to photograph, and only took me half an hour to build.’

Regarding her hiatus from exhibiting, Teo says: ‘I am trying to get back into practice again, and create more interest in pinhole photography in the age of digital media at the same time. Pinhole photography is the simplest form of capturing images. It’s back to basics and one can get amazing photographs out of this.’

After her self-created contraption was made, Teo went out exploring the Kampong Glam area and ended up creating a series of around 15 intriguing photographs, which will be displayed at her solo show at Objectifs. All of them are in black and white, as it is her preferred style. ‘I find colours distracting,’ she explains. ‘There is a peculiar mystery to black and white. It’s quiet and strong.’

Teo admits she chose Kampong Glam as her shooting location mainly as a matter of convenience, as Objectifs was located nearby – after each shot, the paper negatives (still inside the bin) would need to be brought back to the gallery immediately to be developed. She adds, however, that ‘it was also a great opportunity to learn more about the history of this area. The Kampong Glam that used to be was very different from what it is now, even though it’s still an area for social gathering.’

Aside from the exhibition, Teo will also be conducting a workshop (on 7 Sep at Objectifs) to explain how pinhole cameras work. ‘I will be teaching participants how to make a pinhole camera, and they can take as many photos as time allows them,’ she says. When asked whether she’ll be bringing out her rubbish bin pinhole again in the future, she says with a smile, ‘I may use the camera for the workshop, and I am definitely keeping it for future projects as well. It’d be good to construct another camera with something different in the future, too!’