For its fourth year, Art Stage Singapore introduces eight curated platforms to showcase works by emerging and midcareer artists in different regions. Gwen Pew rounds up six of the most interesting pieces you can find there. 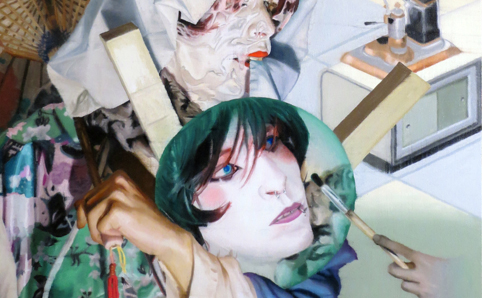 Samuel Quinteros’s ‘Prelude to Mercurius’. Image courtesy of the artist.

At only 21, Sydney-born and based artist Samuel Quinteros just graduated from Sydney College of the Arts, University of Sydney last year, but his sophisticated dream-like paintings far belie his years. His fascination with the Asia Pacific’s culture and identity is often incorporated into his oils on canvas, but as ‘Prelude to Mercurius’ shows, Quinteros is also inspired by a wide range of topics, giving a nod to everything from European religious paintings to Japanese manga and the punk movement.

Hoping to get his audiences to look at the natural world in a different light and perspective, Japanese artist Nobuhiro Nakanishi plays around with the relationship between time, space and body in his pieces. Here, he takes a series of photographs of the sky (all taken in the morning) and prints them onto transparent films, which are then arranged in layers. The resulting work, titled ‘Layer Drawing – Cloud/ Fog’, provides not only a beautiful, but also all-encompassing experience for those looking at it.

Although Lai works with oil on canvas and Choo – who received the prestigious ICON de Martell Cordon Bleu award in 2013 – works with photography, both local artists take on Singapore’s modern issues, which is a theme that surfaces frequently in their art. Lai’s trio of paintings, including the unsettling ‘Night Market’ (pictured), show twisted, reversed city scenes, while Choo’s panoramic film, ‘The Hidden Dimension (II)’, depicts families performing mundane tasks in a surreal household.

Entitled ‘The Hundred Surnames in Tofu’, the Chinese artist’s work lives up to its namesake – it quite literally consists of a list of Chinese surnames ‘spelt’ out in the form of bean curd. Both the food and the family names are an important part of traditional culture and heritage, and as the artwork decays over the course of the exhibition,Chen is hoping to express the similar deterioration of her country’s past as it bulldozes headfirst into modernity.

Deeply influenced by his native India, multimedia artist Jitish Kallat’s ‘Circadian Rhyme – 4’ comprises a row of detailed miniature figurines made out of resin, aluminium and steel. Although they are clearly being searched by officers at an immigration checkpoint, which hints at India’s attempt to enter the world economy, there’s a playful quality to the figures as well – the artist has suggested they could also be dancing with one another, implying that everyone is merely playing a role in society.

It’s not hard to understand Anida Yoeu Ali’s obsession with the notion of identity, given her background – she’s a first-generation Muslim Khmer born in Cambodia and raised in Chicago. She frequently works with Studio Revolt, an independent media lab run by a group of artists, and is known for her video, installation, sound and performance pieces. Her Buddhist Bug project is no exception, which depicts Ali dressed up as the creature in various locations, symbolisin spirituality amidst today’s society.