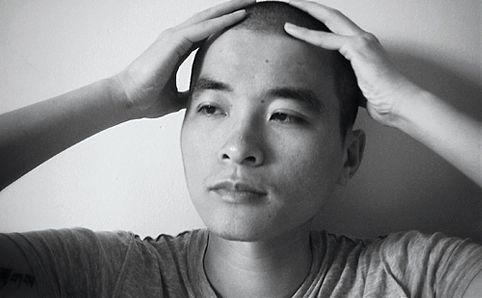 1 Jul 2014: Liu Xiaoyi could have left Singapore for good and lived the life of a proud inn owner in Yunnan, China. But fortunately for us, after spending a couple of years entertaining visitors at a refurbished five-bedroom guesthouse he bought with his wife in the idyllic town of Dali, he came back. ‘I missed Singapore too much,’ he grins. Besides, he knew in his heart that he was destined to work in theatre. ‘Dali is too serene. I tried to do a bit of theatre there, but it’s so peaceful and nice that it was hard to get people to do anything!’

Born and bred in Guangdong, China (in the city of Jieyang), Liu first came to Singapore in 1998 when he won a scholarship at Anglican High School. He didn’t grow up with theatre, and indeed, his discovery of the art was almost accidental; it all started with a job ad he saw in Lianhe Zaobao when he was pursuing a degree in Engineering at Temasek Polytechnic in the early 2000s. It was posted by The Theatre Practice (TTP) – the Chinese production company founded by Kuo Pao Kun in 1965, and now helmed by his daughter, Kuo Jian Hong – and he wrote in.

‘No news,’ he says, shaking his head a little. He forgot about it, but a couple years later, he got a call from Kuo. Following a few rounds of interviews and auditions, he ended up starring as a crow in their 2002 production of Animal Farm, and that was the start of his professional theatrical career.

In the decade since then, the 30-yearold has risen to become one of the best Chinese playwrights in town, and is now the multi-talented director of TTP’s Practice Lab, a series of courses for budding playwrights, actors, directors and reviewers. Last seen in the sold-out production of Art in this year’s Huayi – Chinese Festival of Arts, he’s back this month to write and direct Fluid, a play presented as part of The Theatre Practice’s M1 Chinese Theatre Festival that essentially questions what theatre is. ‘My original idea was to put two performers onstage and have them talk without directly talking to each other,’ he explains. ‘Many people think that drama is the only form of storytelling, so I wanted to challenge and question that.’

After going into the rehearsal rooms for the first round of workshops and improvisation sessions with his cast, Li Xie and Lim Chun Huat, however, he found himself being challenged by the two of them instead. ‘They said that the question of what theatre is is too cold, too distant, too… intellectual,’ he admits. ‘They started asking me why the question is so important to me, and how the audience is supposed to connect to it. And then it occurred to me that I’m really trying to explore the themes of self-doubt and fear – why am I doing theatre?’ When he reached the revelation, he was initially worried that it’d be too ‘selfish’ to centre the work on his own insecurities, but Li and Lim reassured him that that’s the essence of what it means to be human.

Flipping through one of the many notebooks he carries around with him (‘I have one for every project I do’), Liu tells us that he originally came up with five questions as the basis of the play, but has since reworded them to make them more accessible. ‘What is theatre?’, for instance, has now been edited to ‘What does theatre mean to me?’. The final piece was yet to be fully devised when we met up with him, but one thing’s for sure – it will be no less thought-provoking than his initial vision. He reveals that one of the actors will likely be talking without moving, while the other will be dancing with no words.

‘I like to challenge both myself and the audience. I like taking a frame and seeing if I can add or change things and make it take on a different form,’ he says. ‘Ultimately, I’d like the audience to question what theatre is to them, but I’d also like them to question Xiaoyi.’