The second show to open as part of the Singapore International Festival of Arts (SIFA) brings plenty of colour, confusion and chuckles, says Gwen Pew as she ventures into the wonderful world of Mystery Magnet. 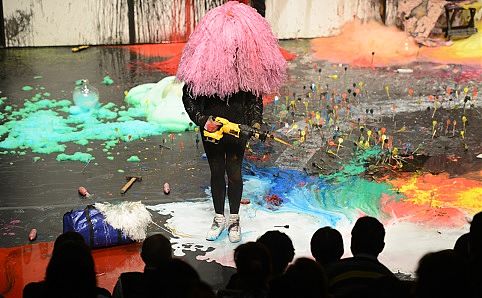 15 Aug 2014: If you go into the show expecting a logical plot, you will no doubt leave with a crushing sense of disappointment. But if you go with a wide open mind, we promise you’ll have a lot of fun. Created by Miet Warlop and performed with Belgian theatre company Campo, Mystery Magnet is one of the most bizarre productions we’ve seen in Singapore for a while. Combining performance with visual art and sound, the scenes that flourished before us got increasingly messy, violent, but also deliciously provocative as the show went on.

There’s just one man in the beginning, lying on the floor wearing a fat suit hidden beneath a dress shirt and pants, as a monotonous thumps of heartbeats pound the air. Once he rolls over and eventually finds his way up, things began to get weirder, and weirder, and weirder still. Over the next 45 minutes, the images we witnessed include people disguised as pants, laughing and taunting the fat man; someone with a brightly-coloured, oversized mop as her head stapling another one of her fellow creatures to the on the giant white canvas that sits at the centre of the stage, before throwing up rainbows of paint; and a butt-naked man wobbling on a pair of heels and a horse tail as a woman rides him around the stage.

At one point, a remote-controlled shark balloon floats through a hole in the canvas and comes up above the audience’s heads, drawing laughs and screams; at another point, hundreds of colourful darts are thrown from behind the canvas to land randomly – and lethally – across the floor. As we sat there engulfed in pink, yellow, green and purple smoke in one scene, we couldn’t help but feel like we were living in someone’s – perhaps the fat man’s – drug-induced dream.

As many have pointed out in the past, there are plenty of references to the art world – the canvas wall ends up looking like a Jackson Pollock painting, the shark is a potential nod to Damien Hirst, and the final choir of inflatable, gaping white figures bear some resemblance to Edvard Munch’s ‘The Scream’ – but it doesn’t mean that you won’t enjoy it if you don’t catch all the allusions. The takeaway for the show depends entirely on you. Rather than telling a story, Warlop instead creates a world of beautiful chaos (not unlike what an artist’s exploded mind may look like) in which things happen without rhyme or reason. It induces all sorts of complex emotions, from disgust to euphoria, while inviting the audience to be the judge of the characters’ actions – they are violent or playful, lonely or mischievous, brilliant or idiotic.

Ultimately, it blurs all the boundaries and raises questions that can yield very different answers and conclusions, and that’s the genius of the show: you’re absolutely free to leave the theatre thinking it’s the best or worst experience you’ve ever had, but either way, there’s no denying that this is one hell of a feast for the eyes and the mind. And, in our opinion, a magical mystery tour with so many possibilities is definitely one that should not be missed.