Presented as part of the Singapore Repertory Theatre’s new Made in Singapore series, Dick Lee’s latest play is based on his father’s real experiences during the Second World War. The beautiful and poignant performance gets full marks from Gwen Pew. 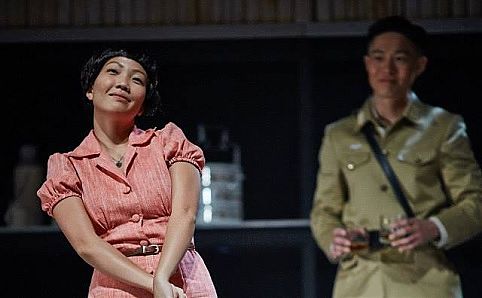 2 Apr 2014: We’ve had the pleasure of seeing quite a few good performances in Singapore, but Dick Lee’s Rising Son – the first play in his newly written Family Trilogy that is shown as part of the Singapore Repertory Theatre’s Made in Singapore series – is on a level of its own. Simply put, it’s a powerful work that is masterfully enacted by a great cast. Based on the true story of the renowned playwright’s father, the plot centres on the uneasy friendship that develops between 18-year-old Sunny Lee (Tan Shou Chen), his naïve but strong-minded younger sister Ruby (Seong Hui Xuan) and a highly-educated, soft-spoken Japanese army lawyer Hiroyuki Sato (Caleb Goh) who moved in next door during the Second World War.

The thing that really comes through in this bittersweet production – one of Dick Lee’s first plays with virtually no music and dance numbers involved – is how human all the characters are. We tend to go into a show expecting there to be a protagonist and an antagonist, and for there to be a right and wrong. Rising Son doesn’t have that sense of black and white, and it’s precisely this quality that makes it so relatable. It shows a huge amount of compassion, and yet the cast never lets the performance slip into the realm of over-the-top melodrama either. It’s refreshing to see Seong and Goh, two familiar faces in the local musical theatre scene, take on such challenging roles, while Tan successfully brings Sunny’s conflicted feelings to life. They embody the very essence of their characters and it’s clear that they understand their parts to the soul. Under Eric Ting’s expert direction, even tiny gestures like silences and sideward glances speak volume.

Of course, knowing that it’s based on the real experiences of Sunny Lee makes it even more poignant, but by the end of the play we can’t help but feel that this is a story that needs to be told. We grow up being told of all the horrors that the Japanese inflicted on locals, and while the work acknowledges that loud and clear through Sunny’s passionate speeches about ‘the enemy’, its ultimate message is that there is no absolute in any circumstances. There is always another side to a story, and there is always hope and kindness, even in places you least expect to find it.

Despite its strong moralistic message, we never feel like we’re being preached at, and that is the genius of the script and the way the actors delivered them. We sympathise with Sunny’s internal struggle, with Ruby’s desperate desire to experience the world outside the house she has to stay within for safety, and with Hiroyuki’s yearning for everything to return to normal so he can go home to his ailing parents. And yet it’s not just the sadness and frustration that we witness; indeed, there are so many little moments of genuine warmth and laughter – Ruby’s attempt to teach Hiroyuki how to dance, for instance, or when Sunny enjoys the evening air with Hiroyuki in his backyard even though their neighbours might gossip – to remind us of life’s simple pleasures. All of that, coupled with an effectively simplistic set and great lighting, makes Rising Son a thoroughly enjoyable, refreshing and beautiful work; kudos to all involved.