Telling a well-known Greek tragedy to a predominantly English-speaking audience in Korean is no easy task, but Seoul-based theatre company Juk-Dal pulls it off with flying colours, as Gwen Pew discovers. 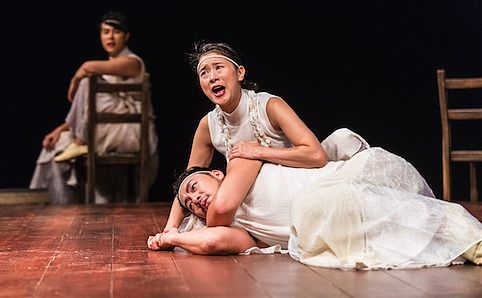 23 Aug 2014: Telling a Greek tragedy to a predominantly English-speaking audience in Korean was never meant to be an easy task, but it was one that Seoul-based company Juk-Dal nonetheless took on bravely. And we’re happy to say that their meticulously planned gamble paid off.

Stripping everything back to basics, there is absolutely no untrimmed fat in their production of the 2,500-year-old tale. The story unfolds so simply and so elegantly, and yet even though we all know that King Oedipus was destined to kill his own father and have children with his own mother, the full weight of the tragedy is not lost on us during the climatic scene when he discovers the truth.

The set is minimalistic, but very clever. The edge of the stage is sealed off, and the audience is seated onstage along two perpendicular sides of the space. A slightly raised circular wooden platform sits in the middle with unlit globes of lightbulbs dangling sporadically above it and three upright pianos placed at one end, right next to a series of steps filled with wooden chairs that are largely occupied by the ensemble. Likewise, costumes are kept simple: everyone, regardless of whether they’re king or queen or peasant, is dressed in loose white robes. As a result of all this, we are encouraged to focus on the captivating expressions on the actors’ faces and their powerful voices instead.

The musical format also works surprisingly well and adds to the story by emphasising emotions of hope, frustration, fear or anger, while the positioning of the pianos – a fourth one, a grand, actually sits behind a door just offstage – gives surround sound a literal meaning. We can’t help but be drawn into the chaos that wrecks the great city of Thebes.

But of course, the best thing about the show is the cast. Under the brilliant direction of Jae-Hyung Seo, they are completely in their element. Hae Soo Park deserves special mention as the tormented Oedipus, and fully embodies the presence and spirit of the tragic hero; he is well supported by Kang Hee Yim and Kap Seon Lee as Queen Jocasta and his brother-in-law Creon respectively. The rest of the chorus are far from idle, too, and take their roles as seriously as their bodies physically allow them to.

By keeping things sharp and simple, the cast is able to achieve their most important goal: to tell a captivating story well. With that mission accomplished, everything else fell into place, and a beautiful piece of theatre worthy of the ten-minute standing ovation it received is born.