It’s been ten years since the international touring production of Mamma Mia was last in Singapore, but the feel-good musical has lost none of its sunny sparkles as it returns this month, say Gwen Pew. 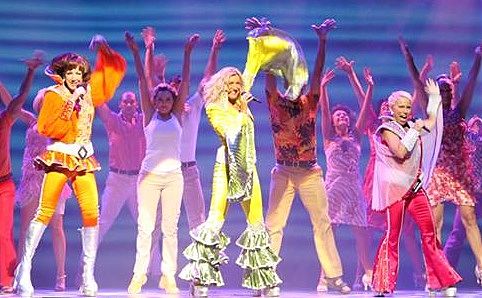 23 Nov 2014: If you’re looking for a place to escape from the rainy days we’ve been getting lately, look no further than the Grand Theatre at Marina Bay Sands – it’s dry, cool and eternally summer in the production of Mamma Mia that’s currently running there. Ten years after its last performance here, the multi-award-winning musical has lost none of its sparkles, and still delighting the crowd with an infectious playlist of Abba songs and feel-good vibes.

The international tour features a cast from the UK, and they certainly do not disappoint. Just in case you need a recap, the story is set on an idyllic Greek island, where 21-year-old Sophie (Niamh Perry) finds out the names of the three men who could be her father after sneakily reading her mother, Donna’s (Sara Poyzer), diary, and invites all of them to her upcoming wedding. Chaos ensues, but of course, love prevails.

The songs are an absolute treat. Poyzer didn’t quite make some of the high notes during the performance we attended, but that could easily be forgiven in the grand scheme of things, as the performance is overall top notch. The star of the show is no doubt Perry, who captures Sophie’s youth and heart with boundless energy and a big, bright voice, but she is well supported by the rest of the troupe: the big group numbers are a sight to behold, and show just how strong the chemistry between everyone is. It all culminates nicely in Sophie’s hen party, which gets heated up with an electrifying performance of ‘Voulez-Vous’, complete with blasts of colourful flashing lights.

The set is pretty much identical to the production in London’s West End, and just as effective and elegant, yet never over the top. The 1970s platform heels and big-sleeved, neon-coloured outfits donned by Donna and her girl band The Dynamos – composed of the hilarious duo Rosie (Sue Devaney) and Tanya (Geraldine Fitzgerald) – are nothing short of fabulous. And by all means, bring the kids, but another thing we love about this production is that it makes plenty of cheeky references to something a bit more grown up – the ‘dot dot dots’, as Donna puts it in her diary. It keeps everyone from the little ones to the young at heart entertained.

By the time the cast performed their final renditions of ‘Mamma Mia’ and ‘Waterloo’, a big chunk of the house was up on their feet, dancing and singing along, which is never a bad sign. And so, if it’s an afternoon or evening of light-hearted fun that you’re after, then go ahead and lay all your love on this show, and bring out the dancing queen (or king) in you.