At 17, Julie Abueva has already performed in musicals and entertained top dignitaries like Barrack Obama. Gwen Pew catches up with the Manila-born, Singapore-raised talent as she prepares for her first non-singing role in the French whodunit play 8 Women. 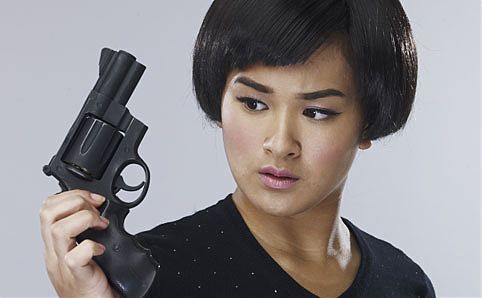 18 Mar 2013: She’s only a year away from finishing high school, but the Manila-born, Singapore-raised 17-year-old singing sensation Julia Abueva has already earned quite a few impressive feathers in her hat. After being discovered ten years ago by local singer Cat Ong, Abueva has performed in front of Lee Kuan Yew, Lee Hsien Loong and other foreign heads of state, including US President Obama. She’s also shared the stage with multi-award-winning Filipina songstress Lea Salonga (the singing voice of princess Jasmine inAladdin), and was invited to perform on The Oprah Winfrey Show as one of the most talented kids in the world at the age of 12 – although she had to turn down the opportunity as the episode coincided with her first sold-out solo concert at the Esplanade here in Singapore.

Abueva has previously been involved in several local musicals, including Into the Woods and Spring Awakening, but she will be making her debut performance in a non-singing role this month in Sing Theatre’s production of8 Women, the darkly funny whodunit (immortalised in the 2002 French movie starring Isabelle Huppert and Catherine Deneuve) about the murder of a lord in a mansion – and the eight women in the house who might have done the deed.

‘I have to admit that my comfort zone has always been music because it helps me “feel” more. Standing on stage without music will be a very new experience but I’m very excited,’ says Abueva, although she also notes many similarities between acting in a musical and in a straight play, such as the approach she takes to understanding her character. ‘The first thing I do is read the script to understand the story,’ she explains. ‘Then I try to imagine my character beyond the script – such as what songs she would listen to, what her favourite book is – and basically create a whole person in my head, because I can then understand her better and make the character more truthful.’

While Abueva admits that it does get difficult to juggle homework with rehearsals – she attends the Singapore American School and maintains the regular 11th grade curriculum – she believes it’s worth it and has big dreams for the future. ‘Of course I need an education, but I also know that I need to take advantage of opportunities that come my way,’ she concludes. ‘I’ve started to write my own songs so I want to start getting my music out there. I also dream of being on Broadway or West End someday. That’s still my biggest dream.’