Phil Kaye and Sarah Kay, both in their mid-20s, are established spoken word poets in America for years. As the power duo hit our shores this April, Gwen Pew catches up with them to find out what slam poetry is really all about. 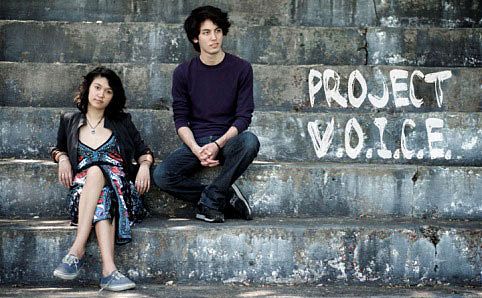 How did the two of you meet?
Sarah Kay: We met during the first week of our freshman year of college. There was a talent show for freshman students, and we were both performing spoken word poetry.

What first drew you into spoken word poetry?
SK: I have always loved poetry, but I never performed my poetry until I was 14. The first time I performed a poem was because I was signed up for a spoken word poetry slam. Somebody signed me up for it, and to this day I still don’t know who it was. But I decided to give it a shot, and ended up falling in love with the experience.
Phil Kaye: I first saw spoken word poetry when I was 17. I saw another 17 year old doing it, and I was completely blown away. The idea of getting up on stage and talking about whatever was important to you, in whatever way you wanted to – that kind of freedom was something I had never seen before.

Would you say that it’s a difficult scene to break into?
SK: It often starts as a regional art form. Which means there usually needs to be a physical centrd for people to gather and share work. That can be at a school, a bar, a community centre. Once there are enough people interested and invested, a ‘scene’ often builds around itself.

How do you come up with your topics? Do you tend to draw from personal experiences, or are they all fictional?
SK: I write poems when I have something I am trying to figure out. It is the way I navigate the world and the issues I am struggling to understand. There is a saying that another poet taught me which goes, ‘Poetry doesn’t have to be fact, but it does have to be true’. That is important to me. Sometimes my poems dive into fantasy or fiction, but there is a truth within them that is very personal to me.
PK: Topics come from anywhere and everywhere. Something your friend said to you in passing. A childhood memory that all of a sudden comes rushing back. Some stupid video you saw on the internet. You never know where inspiration may come from – the trick is letting yourself be open to being moved.

It’s hard enough to do spoken word by yourself, let alone for two people to do it together! How do you guys make it work?
SK: In terms of performing together, it’s like performing a duet with instruments. You learn the rhythm of the piece, and can be on-beat together. In terms of working together, we were friends before we were business partners. So all of the things that make a friendship work we carry into our work. Mainly, good communication. Sometimes we aren’t on the same page, of course, but that’s ok. That’s what we communicate for, to work through those moments.
PK: We’re honestly a lot like siblings. So there’s all the stuff that comes with that – the familial love, the occasional squabble, the desire to support each other. We’re trying to bring the best out of each other – as poets, friends and people.

How many times would you rehearse a poem before taking it onstage? Would you practice it in front of anyone or anything? Family members? The mirror? A pet…?
SK: I don’t practice in front of a mirror, because it doesn’t reflect – no pun intended – the reality of what a performance will end up being like. When you perform for a mirror, you are performing for an audience of one, and that one person looks like you. When I actually perform for an audience, there is more than one person, and they often look nothing like me. So a mirror-rehearsal doesn’t help me prepare. It’s really important to me at every performance that I am very present in the room. I wait until I hit the stage before deciding what I’m going to perform. I want to know what kind of space it is, who is in the room, what they are in the mood for, etc. I think it is my duty as a performer to entertain and challenge and impress an audience, and I can only do that if I am tailoring each performance to the group I am with. I do practice on my own, and I practice with a very small group of family and friends whose critical feedback I trust.

Have you ever forgotten your lines on stage? What do you do in that situation?
SK: Of course. The good news is that the audience usually doesn’t know what the lines are supposed to be. It is my responsibility to take them on a journey with me. We are going to get there no matter what, even if we have to take a momentary diversion. The key is not to panic. Part of what is exciting about this art form is the fact that there is a performer sharing themselves ‘live’. That means they are human. Audiences know that. You don’t have to be a robot. You’re allowed to stutter or pause. Sometimes people envision an audience as a group of people who are waiting to pounce as soon as the performer messes up. But that’s entirely unrealistic. The audience wants to enjoy themselves, not feel uncomfortable. The audience wants you to do well. And as long as you remember that everybody is rooting for you, messing up one line isn’t going to be a big deal.
PK: Definitely. But most of the time the audience doesn’t know. The only time I had a real train wreck was once at a solo show a few years ago. I had just written a new poem, and hadn’t quite memorized it as well as I thought I did. About two thirds of the way through, I completely froze up. But the amazing thing was that, after a few moments of silence, I couldn’t help but laugh – and the rest of the audience laughed with me. I explained the situation, got my sheet of paper, and read the poem. And it was the biggest hit of the set. Audiences want to see real people in front of them, even if that means messing up. That’s part of the magic.

If a young slam poet wannabe asks you for a top tip for the art form, what would it be?
SK: Don’t be tricked into thinking that some people ‘have it’ and some people ‘don’t’. You don’t have to be ‘born a poet’. Half of being a poet is just having the courage to write your way through the bad poems, without quitting. You should not give up just because it might be hard. It takes work, it takes practice, it takes dedication. It is full of joy and celebration, but it is also a craft that involves skills. Skills that you can hone. Other than that: keep learning by watching other people, reading a lot, and figuring out what works for you.
PK: Go on YouTube and watch a ton of poems. Don’t stop at the first one or two people you like. Find people you can’t stand – identify why you can’t stand them. Find people you love – write down what you love about them. Aspiring directors go out and watch a bunch of movies – it’s the same thing with poetry! If you’re trying to be a spoken word poet, go out and watch a lot of poems. They’re only three minutes each!