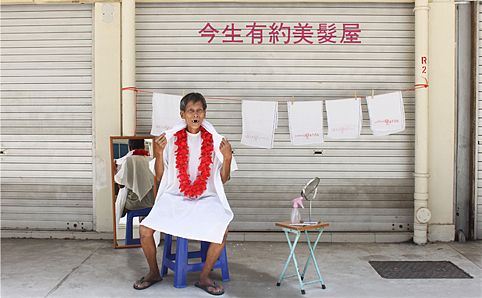 With Singapore undergoing constant change over the years, a group of students from NTU’s School of Art, Design and Media decided to explore HDB’s Selective En-Bloc Redevelopment Scheme (SERS) and its effects on people displaced from the evicted estates. They chose to focus on the recently evicted Tanglin Halt area, and when visiting, stumbled across the area’s resident karang guni, Mr Chua, who inspired them to feature him in a series of staged photographs depicting the ‘reopening’ of the estate. Here, student Aurial Lee, 23, explains more about the show.

‘We have been prescribed a generic way of looking at the past, but it is important to understand that history is plural. This project explores the lesser-known narratives that veer away from orthodox versions of how we remember Singapore, and we want more people to uncover these stories.

‘We focused on the Chap Lau Chu (which means ten-storey estate in Hokkien) in Tanglin Halt because of its historical significance – it was where some of the first ten-storey HDB flats were built in Singapore. The flats signified a period of rapid modernisation in the ’60s. It was also adjacent to the KTM railway – the umbilical cord that connected Singapore to mainland Malaya.

‘As our initial aim was to uncover stories from the ground, we explored the area hoping to talk to ex-residents, but the estate was already mostly evicted – its emptiness was jarring. While walking, we spotted piles of recyclable materials that led us to Mr Chua’s corridor/ living space. We found out that he had been a karang guni man for more than ten years, and he sees his job as one that helps save the environment. He had a certain presence in the estate – often the target of complaints among the residents due to the clutter he was responsible for. He kept the corridor of his old house as a holding ground for his stuff, but has since had to move to a new block nearby, where he is unable to continue as a karang guni man due to space constraints.

‘But Mr Chua remains unfazed. He told us very matter-of-factly that he would “just get another job”. His tenacity with regards to finding a new home or a new job was what inspired the satirical approach for the project – we asked for his involvement as the central figure in our photos, and after understanding his role in each shot, he even gave us some input as to how he should stand or which props to utilise.

‘The photoshoot had a performative aspect, which we followed up with a showcase at the Chap Lau Chu void deck that brought together ex-residents and like-minded individuals. Our previously over-romanticised presumptions on “memory” and “past” have been altered by Mr Chua’s resolve to carry on with the everyday. Each stage in our project created a new layer of meaning for Tanglin Halt – the beauty lays therein the dialogue about memory, space and progress that kept growing as more people learn about our project.’