As Dick Lee celebrates his 40th anniversary in the entertainment scene this month with a revival of his 1997 musical, Hotpants, Gwen Pew chats with him to look back at his glittery career. 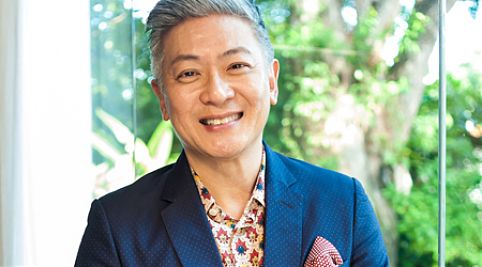 30 Jul 2014: Forty years is a long time, and a lot can happen during that period. For showbiz veteran Dick Lee, who turns 58 this month, however, things have by and large remained unchanged. ‘Forty years ago, I was having a blast designing, writing songs and putting shows together,’ he tells us. ‘And now… I’m doing exactly the same thing!’ That’s not to say that he’s still where he started at all those decades ago, though; indeed, we can think of few other local artists who have had such an illustrious and successful career across multiple disciplines.

Lee dropped out of school at 16 and began his life in entertainment by taking part in various talent shows with his siblings. Making it a point ‘to know all there is to know’, as he puts it, his determination and passion paid off when he went on to write hundreds of songs, such as the catchy ‘Mustapha’ from his critically-acclaimed 1988 album The Mad Chinaman and Kit Chen’s 1998 National Day favourite, ‘Home’, as well as musicals, including household titles like Beauty World (1988) and Fried Rice Paradise (1991).

When he first started out, he remembers Singapore’s arts scene as a very different landscape. ‘I only recall Neptune Theatre and Tropicana nightclub, both of which had topless cabaret shows back then! There was the occasional arts performance brought in by legendary impresario Donald Moore, who was rumoured to be a spy. I remember particularly the Bolshoi Ballet at the Old National Theatre,’ he recalls, but also added that ‘the local music industry that thrived in the ’60s was killed off in the ’70s by the “cleaning up” of Singapore, the introduction of NS, etc, so it was pretty dire. One could only play in bars or take part in talent shows. I did both.’

From his first fashion show in 1973, for which he ‘designed the clothes, wrote the music and directed’, to his first performance in Tokyo in 1990 and ‘floating over the Old National Stadium in a balloon during the National Day Parade I directed in 2002’, the Cultural Medallion recipient has plenty of memories to look back on today. But aside from music and theatre, he has also dabbled in fashion and food – his restaurant MAD (Modern Asian Diner), which was styled after his Mad Chinaman moniker, closed its Singapore outlet earlier this year, opening one in Jakarta instead. More recently, he has also showed off his skills as a visual artist by debuting some of his drawings and paintings at Galerie Belvedere (some of which can be viewed there this month). When we asked him whether he’s got more secret skills hidden up his sleeves, he replies ‘I’m afraid that’s all’ – before going on to reveal that he’s preparing to direct his first movie, which begins filming in January next year.

To mark his showbiz milestone anniversary this month, he will be staging the first revival of his 1997 musical, Hotpants. Set in the golden age of the 1970s, the story is centred on a trio of friends – and their mothers – as they attempt to deal with various family members, rivals and a common love interest, all while trying to make it big through the inter-school talent show. ‘The ’70s is an era that’s very special to me, as that was when I decided to follow my heart and do what I still do today,’ explains Lee. It stars a hot, young cast comprising radio DJ, actress and newly-minted Dim Sum Dolly Denise Tan as leading lady Connie, and Dwayne Tan as her husband Alfie; they are joined by Nikkie Muller, Singapore Idol alumni Tabitha Nauser and Joakim Gomez amongst others. ‘I’ve removed some songs and added a few more, as well as tightened the script,’ says Lee. ‘But most importantly, I’ve still retained the atmosphere of innocence and charm.’

On top of the movie and Hotpants, Lee is currently also preparing for this year’s National Day Parade – which he is directing – working on three new musicals, as well as a bunch of other projects that are part of the SG50 celebrations. Happily, he’s still living it up and loving it all: ‘I feel blessed to have been on my journey, and thankful that I followed my heart at every crossroad and turning point,’ he concludes. We look forward to many more decades of great shows, great tunes and great times from him.