11 Aug 2015: Japanese theatrical extravaganza Takizawa Kabuki marks its tenth anniversary by coming to Singapore for its international debut. Gwen Pew hits Tokyo to chat with the star of the show 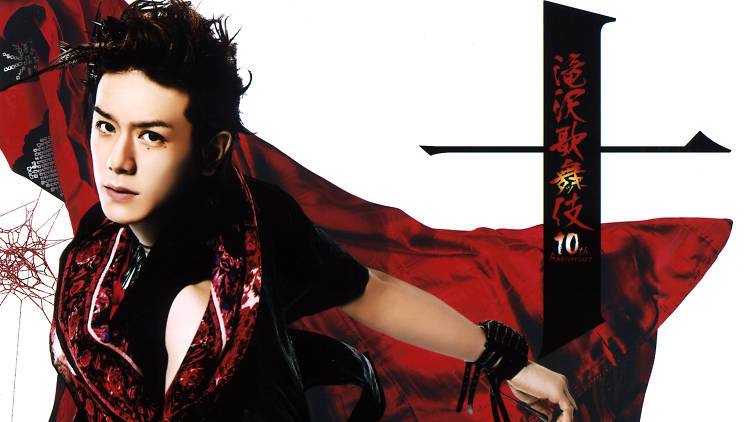 It is almost 10pm when we emerge from the Shinbashi Enbujo Theatre in Tokyo. Despite it being an unusually cold evening for that time of year, a huge crowd of female fans gathers outside the back door. Their cause? To catch a glimpse of their idol, the actor-singer Hideaki Takizawa.

You wouldn’t be able to tell from his boyish good looks, but Takizawa – affectionately known as Tackey – is 33 years old. Taken in by Johnny & Associates, Japan’s largest male talent agency, when he was just 16, Takizawa struck gold as one-half of the J-Pop duo Tackey & Tsubasa before rising up the ranks and gaining the trust of Johnny Kitagawa, the agency’s founder. ‘Johnny decided that I should get into acting,’ he tells us. ‘So I did.’

TV dramas, commercials and theatre followed, and now he’s the star of Takizawa Kabuki, a modern and colourful take on the four-centuries-old art form that’s making its international debut on our shores this month.

Takizawa Kabuki, like most of its home country, is an intriguing if perplexing mix of the old and the new. ‘There’s no other show like this in Japan,’ says the fresh-faced talent. ‘Johnny wanted to stage something that’s in line with the Japanese taste, but still create something very different.’ Under Kitagawa’s supervision, Takizawa is also directing the spectacle.

Takizawa mentions that in Japan, he watches everything from Cirque du Soleil in Las Vegas to kabuki and family-friendly shows like Peter Pan, so he can incorporate different elements into his own production. A curious combination of J-Pop, comedy, drama, acrobatics, shadow play, kabuki and more, Takizawa Kabukidefies traditional definition – and it’s a sight to behold.

One of the more memorable scenes is an impressive Taiko drumming segment, in which 40 bare-chested men hammer their instruments while Takizawa – and his drum kit – are slowly turned upside-down. There’s no room for error. The backstage crew manually control everything, from hoisting actors up in the air to backdrop changes, with an elaborate pulley system. Clearly, no expenses were spared.

The kabuki scenes are just as visually arresting. We’re also treated to one in which the cast members apply makeup on stage – something even Japanese audiences aren’t usually privy to. However, those aching for an authentic kabuki experience can look elsewhere, perhaps to Ebizo Ichikawa XI’s return to the city in October.

While Takizawa Kabuki will be tweaked for local audiences, and a few scenes – especially those that require surtitles – may be nixed, we’ll nonetheless get to have extra fun with a snow machine. ‘Singapore doesn’t get to experience snow,’ Takizawa says. ‘So we want to bring the snow there.’ It makes sense, since the theme for this year’s edition is ‘Four Seasons of Japan’.

Yet whatever the weather, you can be sure of one thing, as evidenced from our trip to the Land of the Rising Sun: it’s not gonna stop the hordes of fan girls. You have been warned.